Demographic Variation in the Frequency of Gliomas in Florida

Are Preoperative CT Findings Useful for Predicting Postoperative Intraabdominal Abscess in the Patients with Acute Appendicitis?

Recent meta-analyses have revealed the feasibility of laparoscopic appendectomy (LA) for acute appendicitis, even in those with complicated appendicitis (CA) [1,2].
Postoperative intraabdominal abscess (IAA) is one of the most severe complications after appendectomy. Some patients who develop IAA require a second surgery and/or percutaneous drainage, while some are treated conservatively [3,4,5]. Therefore, the development of postoperative IAA is a major cause of morbidity for patients who underwent appendectomy. To make a well-considered perioperative strategy associated with preventing or detecting the postoperative development of IAA, the perioperative prediction of risk factors for developing IAA is essential for surgeons.
Some risk factors associated with IAA have been reported [6,7,8]. However, there are few reports that report preoperative computed tomography (CT) findings related to the development of IAA. The aim of this study is to determine the predictive features of patients with a high risk of developing IAA after LA, identified based on their preoperative CT images.

Two hundred and sixty-four patients, preoperatively diagnosed with acute appendicitis, underwent LA in our department between January 2013 and March 2018. The preoperative clinical and radiographic factors in these patients were retrospectively reviewed and patients were divided into simple a appendicitis (SA) group and a complicated appendicitis (CA) group. Patients who underwent interval appendectomy, patients who had been pathologically proven as having appendiceal tumor and patients who had not had preoperative CT were all excluded from this retrospective study. Perioperative factors in these groups were compared and the risk factors predicting postoperative IAA were investigated. The study was conducted in accordance with the Declaration of Helsinki, and the study protocol was approved by the institutional review board of Fujinomiya city general hospital (decision no. 83: 29 October 2018) and informed consent was waived for this retrospective study.

2.2. Definition of Simple and Complicated Appendicitis

At our institution, all patients with an acute abdomen that suggested acute appendicitis underwent enhanced CT, unless the patient had a contraindication, such as an allergy to contrast agents or impaired renal function. Patients diagnosed with acute appendicitis were treated surgically or conservatively, according to patient’s tolerance and selection. For patients with generalized peritonitis, we performed an emergency operation. We generally intended to complete the operations laparoscopically for all patients preoperatively diagnosed with acute appendicitis after 2013.
We used a 10-mm port for the camera (30-degree oblique laparoscope) at the umbilicus incision and two 5-mm ports at the left and middle lower quadrants for instrumentation. For the patients in whom it was difficult to keep surgical field, another 5-mm port was added at the right lower quadrant. After pneumoperitoneum, dissection around the appendix was performed. The mesoappendix was cut using an ultrasonic dissector (Sonosurg; OLYMPUS, Tokyo, Japan). The root of the appendix was closed doubly by ligation, and the appendix was cut and removed. For patients in whom it was difficult to ligate the stump of the appendix, mobilization of the ileocecal was performed, and mini-laparotomy was added at the umbilicus incision to close the stump. In all cases with CA, intraabdominal irrigation with saline was performed after closing the stump until the contaminated fluids became clear. The drainage tube was placed on the right paracolic gutter and/or rectovesical pouch at the surgeon’s discretion. In seven cases in the SA group and four cases in the CA group, a single incisional laparoscopic appendectomy was performed at the surgeon’s discretion [9]. Generally, antibiotics were administered after surgery until fever and inflammatory response had subsided. Cefmetazole (2–4 g/d) or meropenem (1.5 g/d) were generally administered during the perioperative period. The selection of antimicrobial agents was made at the discretion of surgeons, taking the patient’s conditions into consideration.
Development of postoperative IAA was confirmed by CT image, which was performed selectively in patients with persistent or recurrent fever and/or inflammatory response after surgery.

Among the 216 patients included in the study, all patients were preoperatively examined by abdominal MDCT in non-enhanced and/or enhanced phases using Light Speed VCT (GE Healthcare, Tokyo, Japan) before January 2017 and SOMATOM Force (Siemens Healthineers AG, Erlangen, Germany) from February 2017. Two experienced reviewers (a gastroenterological surgeon with twelve years of experience and a radiologist with seventeen years of experience) retrospectively reviewed the radiographic parameters to determine the presence of appendicolith, periappendiceal fluid, abscess, free air, and small bowel obstruction (Figure 1A–D). Measurements were performed in consensus and both readers were blinded to the outcome at the time of performing the measurements.

2.6. Statistical Analysis of the Surgical Outcomes and Clinical and Radiological Factors

The clinical and radiographic factors were compared. Each cutoff value was determined according to the median value or a receiver-operating characteristic curve, adjusting to a value easy to use in practice. The continuous variables’ distributions were verified using the Kolmogorov–Smirnov test and continuous variables were expressed as median and interquartile range because of their abnormal distributions. Pearson’s chi-square test was used to assess nominal variables, and continuous data were compared using the Mann–Whitney U test. Multivariate logistic regression analysis was performed to determine independent predictors of outcomes. All statistical analyses were performed using the Software Package for Social Sciences, version 11.5J for Windows 10 software program (SPSS, Chicago, IL, USA). A p value of <0.05 was considered significant.

3.1. Comparison of the Clinical Factors between the Patients in the SA Group and CA Group

3.2. Perioperative Prediction of IAA in All Patients

Our study revealed that IAA predominantly developed in patients with CA. Preoperative CT findings of free air was found to be an independent predictor for the development of IAA.
Previously, LA has been reported to imply a higher risk for developing IAA compared to that of conventional open appendectomy [11,12]. On the other hand, recent reports suggest that the risk for IAA is comparable between LA and open appendectomy [1,2,13,14,15,16]. These reports suggest that LA is already a treatment of choice for acute appendicitis, including CA. According to a recent meta-analysis, the incident rate of IAA in patients with CA after LA was 8.0% [1]. In the present study, 18 out of 147 patients with CA (12.2%) developed complications of Grade 3 and, notably, 12 of these 18 (66.6%) were derived from IAA. In addition, three patients required a second operation due to IAA. These results suggest that IAA is a major complication after LA.
Several risk factors for developing IAA, such as obesity, leukocytosis, perforated appendicitis, longer operation time, and peritoneal irrigation have been suggested previously [6,7,8]. On the other hand, preoperative CT findings that predict the postoperative development of IAA have not been investigated in detail. Kim et al. investigated the association between preoperative CT findings and 30-day adverse events. In their study, a presence of extraluminal air was not significantly associated with 30-day adverse events [17]. However, in their study, presence of extraluminal air showed a tendency to be found in patients with postoperative adverse event (p = 0.059 in univariate analysis). In addition, as opposed to our study, they included not only IAA but also peritonitis and small bowel obstruction as adverse event and their study population was limited to the patients with appendiceal inflammatory mass.
Our study also revealed that postoperative IAA predominantly develops in patients with CA. Although preoperative CT finding is considered useful for distinguish CA from SA [18,19,20,21], the definition of CA includes pathological findings, which is proven postoperatively. We retrospectively reviewed the preoperative CT findings of all study patients with acute appendicitis and found that the presence of free air was independently associated with the development of IAA, while the presence of abscess or periappendiceal fluid was not an independent predictor. We suppose that free air reflects a presence of major perforation in the appendix wall, resulting in bacterial adhesion which is not cleared by irrigation. We propose that this bacterial adhesion should be considered a contributing factor in abscess formation.
In our study, the placement of a drainage tube was also significantly associated with the development of IAA in patients with CA. However, in our study, we placed a drainage tube at the surgeon’s discretion; that is, we placed them in patients who were considered high risk for developing IAA according to intraoperative findings. Therefore, this result might imply a strong bias. It remains controversial whether a drainage tube is useful for preventing IAA. Some authors advocate that a drainage tube should be placed after peritoneal irrigation in order to prevent IAA [6]. On the other hand, according to a recent report, there is no clinical improvement by using an abdominal drainage after LA for CA [22,23]. An additional validation study is required regarding this aspect.
Regarding intraoperative irrigation, Cho et al. reported that irrigation was a risk factor for developing IAA [6], and further that irrigation implies a risk for spreading contamination. However, it was not demonstrated in a recent meta-analysis [24]. In our study, all of the patients in the CA group performed irrigation until the contaminated ascites became clear. Therefore, we could not validate whether irrigation could be a risk factor for IAA.
Our study was not without limitations. First, this study is based on a retrospective and single-center experience. Another limitation was that the number of the patients who developed IAA was small and postoperative CT was selectively performed. Additional external validation is necessary to confirm that these findings are applicable to other patient groups. In addition, in our study, the patients were not distinguished according to their age, ranging 5 to 91 years. Inconsistency of antimicrobial agents might be another limitation. Furthermore, two readers obtained CT findings via a consensus read. It would be desirable to perform measurement by several readers independently.

We found that the presence of free air on preoperative CT in the patients with acute appendicitis was an independent predictor for postoperative development of IAA. Surgeons should be meticulous in managing the postoperative course of patients with this finding. 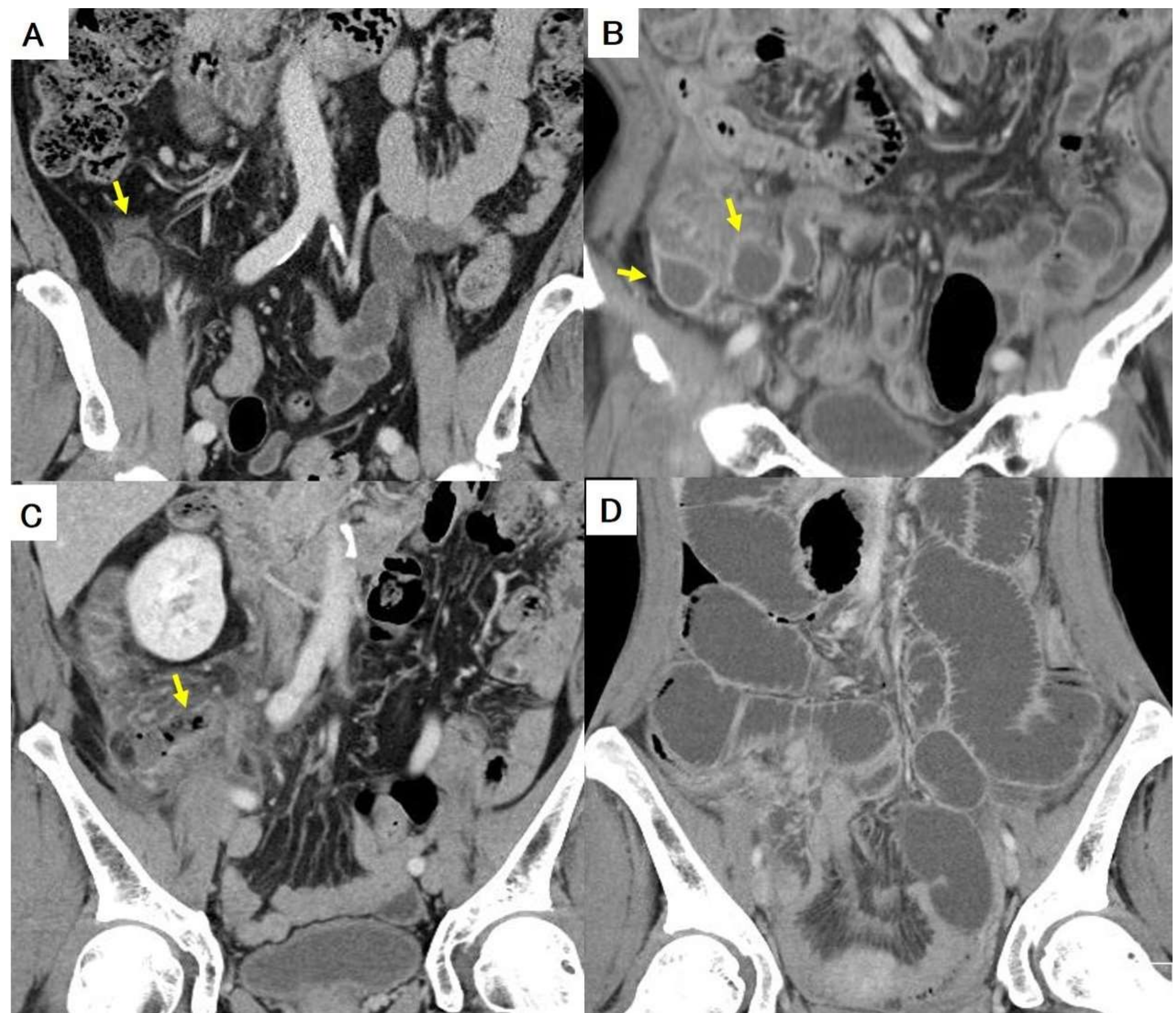