Angiogenesis: Managing the Culprits behind Tumorigenesis and Metastasis
Previous Article in Journal

:
Introduction: Pregnancy, infancy, and early childhood are periods of rapid growth and development. The role of nutrition is very important during these critical growth and development periods. The aim of the study was to investigate infant feeding practices through the first year of life in Latvia, and to compare feeding practices with nutritional guidelines in Latvia and other European countries. Methods: We analysed cross-sectional study data from food frequency questionnaires with additional questions on breastfeeding and complementary feeding introduction. A total of 266 infants from all Latvian regions from birth to 1-year-old were included in the study. Breastfeeding rates were assessed by month of age. Complementary feeding was assessed using three age groups (0–3.9 months, 4–6.9 months, and 7–12.9 months), whereas two groups were used to assess food frequency and portion sizes (0–5.9 months and 6–12.9 months). Results: The breastfeeding rate during the first month of life was 89%. At 6 months, 68% of infants received breast milk, but by 12 months, only 45% still received breast milk. Complementary foods were introduced at a mean age of 5 months (standard deviation = 1). Before 4 months of age, 9% of infants were receiving complementary food, the majority (85%) between 4 and 6 months of age. There were 6% of infants who were introduced to complementary foods after 7 months of age. First complementary food choices were mainly porridge (64%), vegetables (21%), and fruits (10%). After 6 months of age, foods from almost all food groups were present in each infant diet at least once per day, such as vegetables (85%), potatoes (85%), fruits (81%), dairy (78%), and meat (73%), less than once per day—grains (88%), fats (73%), cow’s milk (66%), eggs (45%), fish (36%), and legumes (28%). Conclusion: Breastfeeding rate during first months of life is high in Latvia. Breastfeeding was sustained at the age of 6 months, in the highest rate among Baltic countries. However, only 45% continued breastfeeding at the age of 12 months, in accordance with WHO recommendations. A guideline on complementary feeding is followed by the majority of parents. There are deviations from guidelines in inclusion of some foods in the diet and frequency of consumption.
Keywords:
breastfeeding; food choices; infants; nutrition; toddlers

Pregnancy, infancy, and early childhood are periods of rapid growth and development. The role of nutrition is very important during these critical growth and development periods. Inappropriate nutrition places infants at risk of impaired emotional and cognitive development and adverse health outcomes [1].
The World Health Organization (WHO) recommends exclusive breastfeeding during the first six months of life. From six months onwards, continued breastfeeding combined with complementary foods of good quality in sufficient quantities for 2 years or longer is recommended. The WHO recommendation applies to all countries and populations regardless of economic status or developmental level [2]. Latvian recommendations on breastfeeding were published by Ministry of Health in year 2003, and are in line with WHO recommendations [3]. The latest data on breastfeeding duration amongst Latvian infants is available from the year 2008. It was published as part of a longitudinal study by The Institute of Anatomy and Anthropology, Riga Stradiņš University [4].
Feeding practices, such as breastfeeding and the timing of introduction of complimentary foods, can influence the risk of infants being overweight and obese in adolescence age [5]. Poor dietary intake may trigger metabolic programming pathways which predispose infants to chronic diseases in later life. Furthermore, exposure to different foods in early life shapes the development of food preferences and eating behaviours in later life [6]. Together, these factors emphasise the importance of focusing on nutrition practices during early life to protect future health.
At present, there are no Latvian national data reflecting nutritional habits during the first year of life. This research will give an overview of Latvian infants’ eating habits. The data can inform healthcare professionals about infant’s nutritional habits and their deviations from recommendations, in order to assist parents in improving their infant’s diets.

In 2012, with the support of the European Food Safety Authority (EFSA) The Institute of Food Safety, Animal Health and Environment BIOR started a cross-sectional study which included 3420 participants covering different age groups from birth to 74 years [7]. Data collection for infants and toddlers was started in 2012 and was completed in 2014. Target sample size was 560 infants and toddlers (0–36 months). Two-stage sampling was used to select infants and toddlers. In the first stage, practices of family doctors and paediatricians from all Latvian regions were selected. In Latvia, every infant is registered at family doctor or paediatrician right after birth. In the second stage, doctors selected infants and toddlers from their patients register.
According to the survey methodology report, selection of practices was representative for the target population, whereas an exact procedure of selection of respondents from each doctor’s register is less clear. Still, it is stated that the presence of selection bias is unlikely [7]. Besides, the characteristics of our study population are in line with Latvian population demographics (Table 1). If parents agreed to participate in the study, interviewers contacted them and collected nutritional data. The interviewers had to have an appropriate education with medical background, as well as experience in nutritional data collection in similar studies. Interviewers had training before starting the survey. Guidelines were given to each interviewer with all necessary information for data collection.
Parents or primary caregivers of the infants and toddlers completed a food frequency questionnaire (FFQ) and a 24 h dietary recall about their infant’s diet. FFQ included additional questions on breastfeeding and complementary feeding introduction. Paper versions of both questionnaires were used. The following data were collected: general information about characteristics of the parents and child, feeding practices—breastfeeding, formula feeding, complementary feeding, consumption of food products from all food groups, beverages, eating habits, and possible food safety risks were observed.
For estimating portion sizes, a validated food quantification picture book in print and electronic version and a liquid measuring cup were used. Interviews were conducted in Latvian and Russian.
Breastfeeding and complementary feeding definitions were strictly defined in accordance with the WHO criteria [8]. Complementary feeding in this paper is defined as introduction of any food besides human milk or infant formula. Several nutritional guidelines were used (WHO, EFSA, Finnish national recommendations, German national recommendations) to evaluate breastfeeding, food choices, and complementary foods introduction timing [9,10,11,12].
The analyses presented in this paper focus on 270 infants from birth to 1-year-old (0 to 12 months). Four participants were excluded because they were missing all or part of the necessary information on feeding patterns. Therefore, the final number of analysed participants was 266 infants. In the present data analysis, FFQ data were used. The two 24-h dietary recalls were used only for nutritional data validation. Breastfeeding and complementary feeding introduction data were from additional questions in the FFQ.
Data were collected in an Excel spreadsheet and analysed with the IBM SPSS Statistics 22 programme. Nutritional data were analysed using the national food composition database. As frequency of consumption of complementary foods and a portion size were not normally distributed (Shapiro–Wilk test), they were summarized as median values with interquartile range (IQR). Age of infants and age of mothers were summarized as mean values with standard deviation (SD). The Pearson Chi-squared test was used to compare proportions. A p-value less than 0.05 was chosen to indicate statistically significant difference.
The study was approved by Riga Stradiņš University Ethics committee on 12 September 2013.

A general description of the study participants is available in Table 1. Overall, proportions of boys and girls, as well as regional distribution of study participants were comparable with corresponding demographic characteristics of Latvian population. The mean age of mothers enrolled in the study was 29 years (SD, 6) and the mean age of mothers in 2012 according to the Latvian statistics was 29 years.

In conclusion, this study provides information on breastfeeding duration, complementary food introduction, and food choices from different product groups. After research data comparison with several guidelines, the conclusion is that breastfeeding duration during the first year of life is not long enough, and initiatives should be done to increase awareness about breastfeeding benefits and support possibilities for breastfeeding mothers. Complementary feeding initiation is done in the appropriate time for the majority of observed infants, and there is little concern about introduction being too early or too late. It is difficult to reach a conclusion on appropriate food choices due to a lack of precise guidelines. Overall, there is a variety of food consumed by infants. This study data on eating pattern and food choices, as well as their comparison with different guidelines, can be used to inform health care professionals within public health initiatives. The data can be used to improve the diets of infants and toddlers, and to guide parents regarding breastfeeding and appropriate food selection during the first year of life. Furthermore, this information is useful for monitoring changes in the eating habits of Latvian infants and toddlers over time.

The authors thank European Food Safety Authority (EFSA) and The Institute of Food Safety, Animal Health and Environment BIOR for research organization and financing, as well as data provision for this study. A special thanks for all the mothers and paediatricians who took part in this study.

Inga Sirina conceived of the analysis, drafted the manuscript, and had primary responsibility for final content; Ieva Strele prepared the data and implemented all analyses; Inese Siksna entered and processed the data; Dace Gardovska contributed to the study design and methodology. All authors contributed to the interpretation of the results and revising the manuscript.

The authors state no conflict of interest. 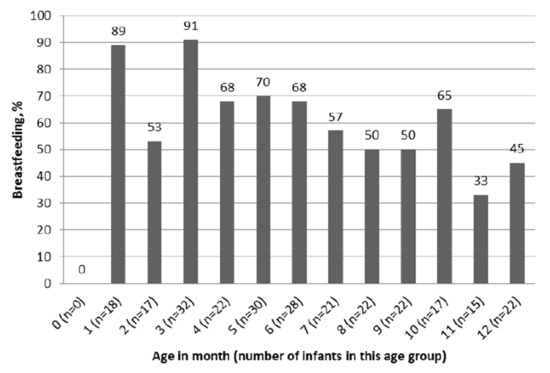 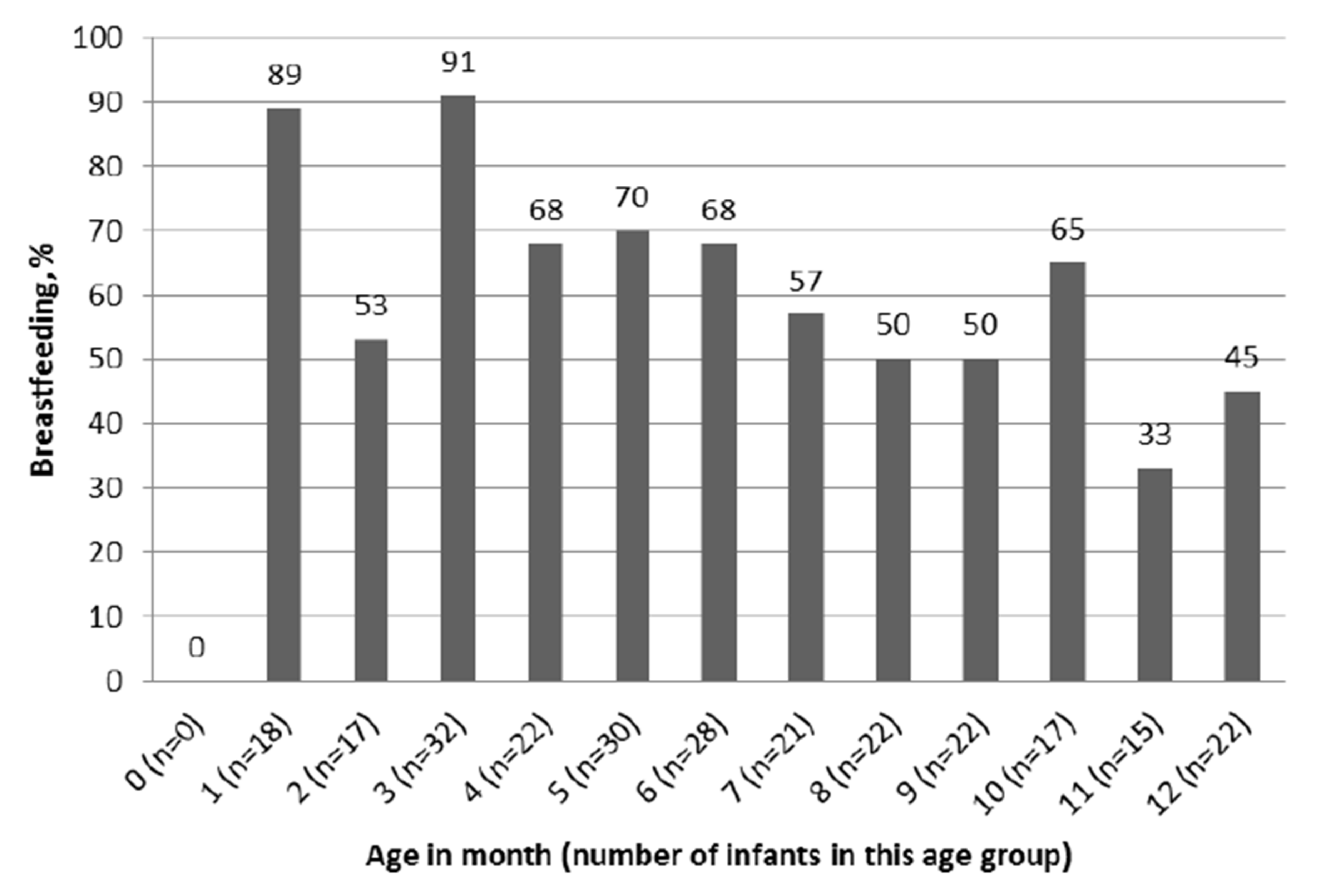